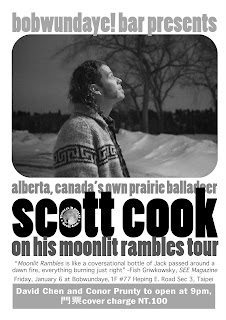 After staying on Taiwan for six years, teaching and playing with The Anglers and The Smoking Cones, Scott left the... classroom to pursue music full-time in 2007, and has been living out of his van all over North America ever since.

He has made two trips back to the island to release his previous CDs Long Way to Wander and This One's on the House, and is excited to return with his best work to date, an album of moonlit nights, open roads, sociopolitical musings, love, loss, and longing, marked by his characteristically mellow fingerpicking, thoughtful lyricism, and plain-spoken honesty.

More info, music and hobo travelogue can be found on http://www.scottcook.net/

Opening act - The dynamic blues duo David Chen & Conor Prunty will be kicking off the evening's proceedings at around 9.00pm.