6th Oct. Sat. Soul to Soul- A night of Rock&Roll

"Soul to Soul" is Mike Mclaughlin-guitar and vocals, Brian Chou-bass, Douzi-drums, Shawn-keyboards.Their classic blues rock based set includes the music of Stevie Ray Vaughan, Jimi Hendrix, the Beatle's as well as their own original compositions. In the mid 90's Mike recorded and toured with legend "Kiss" drummer Peter Criss for several years before Moving to Taiwan in 2001. All the members of the band are veteran's of the Asian music scene playing and recording with such artist's as "Amei", "Jolin", "S.H....E", "Powerstation", "Chyi Chin" and many more. As Mike said, " the reason we formed this band was to have fun and to plat the kind of music we don't usually get a chance to play with Asian pop artist's." 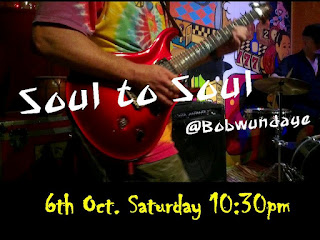 We have only 80 tickets, Come to Bobwundaye early that night!